Tragedy at Holocaust Museum used to take a potshot at homeschoolers.

Apparently some people have to take a potshot at homeschooling no matter what the subject is.

One of the many reasons parents use as a reason for homeschooling is that it protects their children from the violence in public schools. In this particular situation, homeschooling would not have protected these children. This could have been a home school group instead of a group of people with common ties to a local public middle school.

Well at least Lynda Altman realizes homeschoolers do get out of the house. 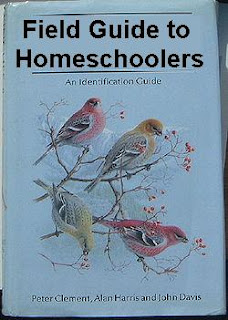 Drop by Principled Discovery to check out the Field Guide Edition.
at 5:09 AM 1 comment:

What you can learn in a homeschool

Frog Guts, Jell-o and Character by Laura Snyder is her attempt to explain what lessons she thinks your kids will not learn if they are homeschooled and why her kids are still enrolled in public schools that she finds lacking.

I’ve found that the public school system can provide certain benefits that homeschooling could not. These are not necessarily academic benefits, but they are things that all children should know.


For example, my 7th grader dissected a frog in school recently. This is something that I couldn’t do at home. Maybe some parents could, but my stomach is not equipped for gore. My son, however, had no problem describing it in detail at the dinner table. He even told me that one child was sent to the principal’s office because he was playing with his frog and making it dance. A disemboweled dancing frog was apparently too much for the teacher.

Well first off there is nothing gory about dissecting a frog. We not only dissected a frog we dissected a starfish, crayfish, fish, clam and an earthworm (dissection kit). And while no one made the frog dance, we did learn a lot. The son who would have probably happily made the frog as well as the earthworm dance was allergic to the preservative. We worked around his allergy by allowing him to watch through the glass on the garage door.

My daughter was grossed out because frog guts reminded her of the spaghetti that was served in the cafeteria for lunch that day.

Also, she said, the roll was hard, the lettuce was limp, the tomato was rotten, the chocolate milk was warm and her straw had a hole in it, which is why she had a chocolate stain on her new shirt.

Not eating her lunch was probably the reason she ate all of her dinner before my son got to his frog story. Another benefit to public school: Nothing builds character like cafeteria food.

“Sucking Jell-o through a straw is okay, but your teacher gets mad if you blow it out!”

Well, that is something I never knew. He certainly wouldn’t have learned that while homeschooling, that’s for sure.

Well my kids managed to learn that while being homeschooled, although it was Mom who got mad when they blew it out. They also learned about mixing a lot of beverages together to make unique drinks and other "kid things".