One Homeschool Association to Rule Them All....................................
Ok, maybe it's not that bad. But the military has decided that they need to define homeschooling in order to meet their needs.
http://www.cobranchi.com/archives/005869.html
http://hr3753.blogspot.com/
http://www.odonnellweb.com/mtarchives/001923.php
http://www.homeedmag.com/blogs/newscomm/?p=189
http://www.vahomeschoolers.org/
Apparently there was a goverment funded study http://www.cna.org/documents/D0009351.A2.pdf (don't you just love the things they spend taxpayer money on??). Anyway the study found that most home schooled males choose to go to college rather then enlist in the military unlike their public school counter parts. Personally I want my kids (both boys) to go to college so to me that is a Good thing. They also found that the home school population in the military did not represent the home school population over all. Most of those classified as "homeschooled" had dependents (in other words they were married{and/or} had kids). What they were mainly concerned about was that those enlisted classified as Home schooled did not complete their enlistment period and did not re-enlist as often as their public school counter parts.
I am concerned about this bill for several reasons.
There seems to be a lot of "unknowns" here. The biggest how does the military intend to define homeschooled.
I intend to work to defeat this bill.
If you agree please contact your U. S. Representatives NOW and let them know you oppose section 522 of H.R. 1815, The National Defense Authorization Act for Fiscal year 2006. Otherwise Section 522 will slip through hidden in this huge bill when Congress approves the Defense Authorization for fiscal year 2006.
Here are links to contact information for both the House and SenateArmed Forces committees.
Senate: http://armed-services.senate.gov/members.htm
House: http://armedservices.house.gov/about/members.html
Here is a link to sign a petition http://www.petitiononline.com/hr1815/petition.html
I just signed and there were 700 signatures.
at 7:42 AM No comments: 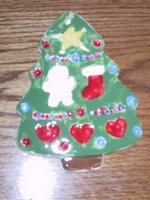 The Mud Shack
Tuesday, November 15th the Gulf Coast Peak Group enjoyed a field trip to The Mud Shack, 10008 Government Street in Ocean Springs (in case you want more info their # is 228-872-6113). We had toddlers to 16 year olds and a good time seemed to be had by all, even the Mom's got in on the act of decorating their own Christmas ornament. And I do believe a new tradition has been born in the Alawine family. I had such a good time I want to do it again next year, and maybe get hubby in on the act.

After The Mud Shack some of us went to Al Fresco for dinner. It's nice to know that some of my favorite restaurants are still around. I read in the paper Mary Mahoney's had reopened. Bo and I spent a very enjoyable anniversary there one year so I was pleased to know it survived Hurricane Katrina. The kids and I keep driving by Sicily's on LeMoyne to see if they have reopened. Looks like it will be awhile before we can visit our favorite pizza hangout.

We picked up our ornaments November 29th. I was very pleased with how they turned out. You will find a photo of Jonathan's Christmas Tree above.
at 6:34 PM No comments: