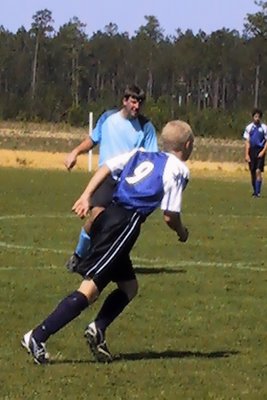 Sean's U16 team played in the Mississippi Youth Soccer's Southern District playoffs in Hattiesburg, MS April 22nd and 23rd. They came in 4th place in their bracket. Way to go Sean!

Sean played for the Ocean Springs Soccer Organization this year. His coach was Doug Bates.

Sean had a great deal of fun playing soccer this year, and hopes to play next year. Because of the disorganization of OSSO this year, we may play for another league next year. We are considering playing for either West River (which is Gautier's league ) or the D'Iberville Youth Soccer Organization. Although Sean would be very sad not to see his soccer friends on a regular basis, and he would miss Coach Bates a great deal. Luckily U14 and U16 players are "free agents" so we have that option.

Sean was very happy that his Grandma Hazel and his Grandpa Wayne were able to come see him play.

His MawMaw Jean was also able to come, unfortunately a soccer ball busted her windshield, so we didn't get to visit with her long.

Thanks to sunscreen we didn't get sunburned, but it was very hot this weekend, especially Sunday. Sean did a terrific job, even though he injured his knee Easter Sunday playing Ping-Pong with Mom (he'll do anything to keep me from winning). After the games Sunday, Bo took us out to eat at Sicily's Pizza. Which we all enjoyed a great deal.
at 3:21 PM