The Rebels of Ireland by Edward Rutherfurd

I really enjoyed the book. Although I am still horrified about the famine. It's hard to imagine so many people dying of starvation, and you can only imagine the agony the parents felt watching their children starve. If you enjoy historical novels I highly recommend this one, along with the Princes of Ireland.
at 8:16 AM No comments:

We have Baby Geese 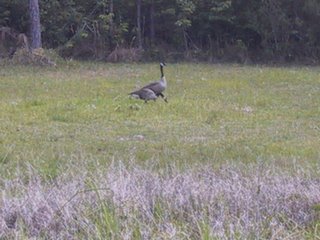 Just in time for Easter to boot. We had a pair of Canada Geese take up residence in our pond. The goose made a nest on the island. Today they hatched, and there are 6 or 7 goslings, swimming around in the pond with Momma and Poppa. As you can tell I am excited. If I can get close enough tomorrow, I'll try to take a picture. They are so cute!!!!!! http://www.kidzone.ws/animals/birds/canada-goose.htm

Didn't get close enough to get a really good picture. I don't want to scare them off. But if you look closely you can see the goslings in this picture. I got a really good look at them with the pair of binoculars we have.
at 7:41 PM No comments:

Whose Version of Luke?

It's apparent that Abraham Smith isn't a theologian, if he was he would not put so much faith in the Gospel of Luke, which by the way the apostle Luke did not write (I am sure Smith wasn't trying to mislead anyone so I wanted to clarify that). The first four Gospels Matthew, Mark, Luke and John were written anonymously by well-educated, Greek speaking, Christians during the second half of the first century. The Gospel of Luke is believed to have been written by one of Paul's companions. We do not have the original of any of the New Testament books (including Luke); we don't even have copies of the original copies. It wasn't until the fourth century, nearly three hundred years after the New Testament was written, that we began to get complete manuscripts of all its books.


Bible scholars know that the words of the New Testament were changed in the process of copying them because they can compare the 5,400 copies that we have with one another. What is striking is that when they compare the copies no two copies agree in their entire wording. There can be only one reason for this the scribes that copied the texts changed them (Some thru human error, others did so intentionally). To put it simply there are more differences among the manuscripts then there are words in the New Testament.


The early Christian Church was full of sects with doctrines differing from one another. There is abundant evidence that scriptures were changed to promote the proto-orthodox viewpoint. (Lost Christianities The Battles for Scripture and the Faiths we Never Knew By Bart D. Ehrman)


Since Smith puts so much trust in Luke; perhaps he would be interested to know that in the oldest surviving witnesses to Luke's Gospel the scripture referring to Jesus' baptism reads "You are my Son, today I have begotten you" Luke 3:22; lending support to the Ebionites and the Roman Theodotians who believed Jesus was the biological son of Joseph and Mary, adopted by God at the time of his baptism because of the pure life he had lead.


Before Smith criticizes people for wanting to know more about the Bible and what the original texts actually said he should keep in mind that both Martin Luther and John Calvin were considered heretics whose views were considered sacrilegious by the Catholic Church. Today both Luther and Calvin's views are accepted as orthodox.

Also if Smith goes back and reads my original letter, he will see that I said “Jesus MIGHT have had a wife” not that he did. There is not enough evidence to be dogmatic either way; and I am sure Smith wouldn’t walk out of heaven if he got there and found Jesus was married to Mary (although if that’s the case I hope Mary sets him straight about being so close minded). As for me I’ll continue to study the Bible and read theological works to learn as much as I can and wait until I get to heaven to find out who was right.

Peak Gulf Coast was invited to view The Chronicles of Narnia - The Lion, The Witch and The Wardrobe at the CB base theater. We had a great time and look forward to future movie days.
at 3:17 PM No comments: