Homeschool Online brings us The Organized Homeschool CoH.
at 4:36 AM 4 comments: Links to this post 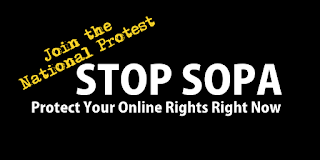 Here is a bill in Congress that will affect your rights on the web and will censor all web sites, blogs, etc.  In a nutshell :


SOPA explicitly states that companies will be liable for everything their users post. Sites like Facebook, YouTube, Twitter, Reddit, Wikipedia, or any sites that allow user generated content CANNOT exist under these laws. Immediately after this bill is passed, you will see the media mafia (MPIAA, RIAA, etc) replacing websites like Wikipedia with commercialized encyclopedia software. Mainstream media outlets will not cover this bill because they are the ones lobbying for it.

If you want to know more - Google created a doc to read and inform - SOPA for Dummies.

WRITE YOUR CONGRESSMAN AND STOP THIS BILL FROM PASSING!
To help you do this stop by Fight the Wall  or American Censorship and find out how to connect with your Representative!
Hat Tip Cats of Wildcat Woods.

Tell Congress to Stop the Bill NOW.
at 5:22 AM 7 comments: Links to this post

Another paranoid homeschooler is blathering about public schools brainwashing kids and how she will protect her kids from stuff like REAL SCIENCE. Why I Homeschool--Part Four: (I can brainwash my own kids, thankyouverymuch!). She of course is partly right by choosing what to teach and how to teach it you do have a tremendous amount of power when it comes to shaping a child's mind.

Apparently Lisa Luper's understanding of SCIENCE is woefully inadequate, but then what can you expect from someone who thinks evolution is silly. Why really learn about it from actual Science Textbooks, when you can dismiss it as silly and turn to an ancient book full of myths and legends (aka The Bible) for your Science instruction.

OK, I don't completely agree with the PC idea that being homosexual is OK I tend to view it as a Gender Identity Disorder. But the author of this nonsense completely ignores the fact that sometimes "a person is born with a reproductive or sexual anatomy that doesn’t seem to fit the typical definitions of female or male. For example, a person might be born appearing to be female on the outside, but having mostly male-typical anatomy on the inside. Or a person may be born with genitals that seem to be in-between the usual male and female types—for example, a girl may be born with a noticeably large clitoris, or lacking a vaginal opening, or a boy may be born with a notably small penis, or with a scrotum that is divided so that it has formed more like labia. Or a person may be born with mosaic genetics, so that some of her cells have XX chromosomes and some of them have XY" You can read more about Intersex People here. But then this is SCIENCE so possibly Luper isn't ignoring it so much as she is ignorant of the condition.


Global Warming is a fact not a fantasy someone cooked up to give Luper heartburn, so is the fact the world is becoming overpopulated. How we deal with Global Warming and Overpopulation will determine if our species survives and what kind of standard of living our species will enjoy. So far the deniers seem to be doing a pretty good job of insuring that we will continue on our hedonistic way polluting the earth and spitting out babies until all the fossil fuels are depleted and droughts and food shortages are common. But PLEASE don't try to explain the Science behind Global Warming to them if it doesn't fit into their Biblical World View they don't want to hear it.


Not all homeschoolers are ANTI-SCIENCE and many of us disagree with her viewpoints.
at 9:14 AM 12 comments: Links to this post

The Constitutional Rights Foundation Chicago has lesson plans on the history of juries as well as on JURY NULLIFICATION.

DEFINITIONS - Jury Nullification
"Jury nullification occurs when guilt is established but the jury decides to acquit on its own sense of fairness, propriety, prejudice, or any other sentiment or concern." Randall Kennedy, Race, Crime, and the Law (1997)

"Jury nullification… may take on a variety of meanings or shades of meaning."

"True" or stringent nullification "occurs when the jury recognizes that a defendant's act is proscribed by the law but acquits because it does not believe the act should be proscribed. The behavior, in other words, is not criminal in the eyes of the jury."

"Intermediate" nullification occurs when "although the act proved is properly classified as criminal, it is within a class of acts that do not deserve the punishment prescribed for them."

"Weak" or "ad hoc" nullification "reflects the jury's view that although the act proved is criminal and falls in a class of acts that may well deserve the prescribed punishment, such punishment is inappropriate in the case at hand."
at 7:52 AM 3 comments: Links to this post