The Princes of Ireland
The Dublin Saga
by Edward Rutherfurd
Link to book review http://www.curledup.com/princesi.htm
I enjoyed the book and am looking forward to reading The Rebels of Ireland when it comes out Feb. 28th, 2006. Guess while I am waiting I'll read the books he has already written.
My only complaint was lack of character development. Of course since he covered such a large period of history he couldn't spend as much time on the characters as I would have liked. In fact if I had, had my way instead of the one large book he wrote, he would have written four or five large books and developed the characters more. They were all very interesting, and I do feel like I have learned a lot about that period of Irish History. Guess I'll just have to make up my own fascinating stories to answer all the questions I have about the characters.
Other books by Edward Rutherfurd
(as I read them)
Sarum The Novel Of England
So far I have just read the first chapter. And since I am eager to get back to the auroch hunt this is going to be really brief. The book takes place in an area near Salisbury Plain from the Ice Age to the Present Day. And in case you want to know what auroch's are http://www.geocities.com/magicgoatman/aurochs.html

Russka, The Novel of Russia

I just finished reading it, and it's a wonderful book. I feel like I understand the Russian people so much better now. The book begins in A.D. 180 and ends in 1990, so a lot of territory is covered.

It starts in 54 BC and ends in 1997. The most astounding thing I have discovered so far was that the Catholic Church ran the brothels. I have only read up to 1376, but I am finding the book very enjoyable.

This time Rutherfurd decided to do something different. Instead of starting in the past and working up to the future, the book begins in April 2000. Dottie, is doing a feature on "The Forest" and is looking for answers to the mystery of what really happened to King William Rufus, The Norman king. As I love a good mystery, I am anxious to jump into this one. http://www.spartacus.schoolnet.co.uk/MEDwilliamII.htm 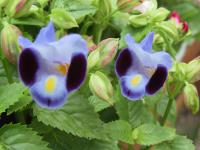 Fall
The weather has been really lovely out. We spent Saturday watching Sean's soccer game in Laurel. As Sean's team has improved, it was an enjoyable game to watch.
Today I planted some wishbone plants, in my flowerbed. So many flowers were destroyed by Katrina, it's nice to see something colorful blooming. Best of all they will reseed themselves, I do like plants that look after themselves. ;>)
I have seen hummingbirds at my hummingbird feeders and some mourning doves at the birdfeeder, so I am looking forward to spending some time outside.
http://www.birds.cornell.edu/programs/AllAboutBirds/BirdGuide/
at 7:53 PM 2 comments: